Everton are ‘interested’ in Philippe Coutinho, claim Sport on Thursday.

The player’s loan stay at Bayern Munich will not be made permanent and his agent, Kia Joorabchian, is looking for a club for in the Premier league.

It’s claimed Barcelona have come up with three options when dealing with Coutinho’s case.

Barca are ready to cash in from his sale and are demanding €90m to avoid any losses. However, due to the global health crisis, they are ready to accept a deal at around €75m in the summer.

Quique Setién’s side are also open to the idea of extending Coutinho’s loan for one more season, giving another club similar conditions to those offered to Bayern.

The last ooption is that the Spanish champions can agree a loan and include a mandatory purchase option.

According to the newspaper, this where Everton ‘fits in’ as Carlo Ancelotti’s side are ‘willing to accept the conditions’ laid out by Barca for Coutinho’s transfer. 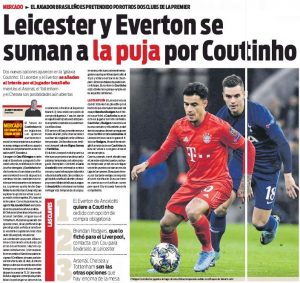 It’s stated Ancelotti has asked for five signings for the next season and Coutinho’s name is included in that list as he meets the ‘technical requirements’.

Over the past few seasons, Everton have signed Lucas Digne, Yerry Mina and André Gomes from Barcelona.

The two clubs share a good relationship and this may help Everton in their efforts to land Coutinho.

Sport don’t say how much the purchase option would be, but it’s surely got to be €75m, or likely less.

There’s every chance Everton are being used to pressure other clubs into agreeing with the terms, with Chelsea previously reported as the likeliest destination.