James Rodríguez’s future is likely to be away from Real Madrid and Everton are believed to be one of the clubs interested in the Colombia international.

Carlo Ancelotti, who wanted the 28-year-old at Napoli last summer, is looking to sign him for the Toffees.

On April 12th, reports from Italy indicated the Merseyside club are in ‘advanced negotiations’ for the South American.

Colombia’s El Universal now claims Everton are ‘bidding for James Rodríguez’. However, they will face a tough battle from Atlético Madrid.

It’s claimed the attacking midfielder could continue staying in Madrid and play for Atlético, where he is wanted by Diego Simeone.

Jorge Mendes, the agent of the Real Madrid playmaker, assures his client would not leave the Spanish capital since Atlético made an offer of €25m.

A move to Wanda Metropolitano means Rodríguez can continue living in Madrid, but it won’t be the case if he decides to join Everton.

The report also adds the player doesn’t rule out the option to continue with his current employer, so that he can leave Real Madrid as a free agent in 2021. 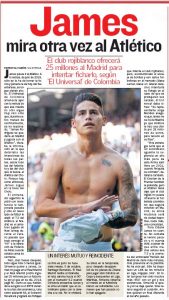 If Rodríguez decides to leave Real, Atlético seem to be ahead of Everton, but El Universal states the saga is not over and more developments could be expected in the coming days.

AS relays claims made in Colombia and they further add Los Rojibalncos first need to offload a few players before they plan to bring in new faces.

The Spanish newspaper states ‘the Government will inspect and monitor the signings attempted’ by Simeone’s side, given they’ve used the Spanish equivalent of the furlough scheme for non-playing staff.