Everton have been dragged into the mix to sign Barcelona’s Memphis Depay this summer.

The forward won’t have a key role this term following the arrivals of Raphinha and Robert Lewandowski, and Ousmane Dembélé’s renewal.

Sport on Saturday explain Depay’s exit is one of the priorities for the La Liga side, who have made it clear that he won’t be allowed to leave as a free agent this summer.

Everton are tagged as they are among the Premier League sides to have ‘approached’ the Netherlands international.

The ex-Manchester United man’s contract expires in 2023. His agents met Barca this week and they are not in favour of signing an extension. The player, for his part, wants to study all the proposals he has received.

This is when the report states Everton, Chelsea and Tottenham Hotspur have approached him. Despite this, the Dutchman is attracted towards Juventus’ offer and there is progress made on this case.

Barca have to lower their demands so that Juve can offer an attractive salary to Depay, for him to say OK to joining them. The Serie A side, who have shown a lot of interest, would prefer to take the attacker on a loan deal. 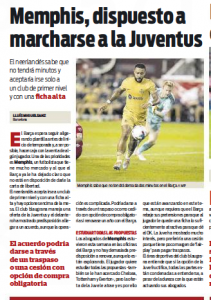 Depay is aware he won’t have prominence at Barca and would be ready to leave them for a top club who can pay him high wages.

Everton would not fall in this category, considering they just managed to avoid relegation last season.