Everton have been very quiet in this transfer window so far, especially when it comes to incoming deals.

Rumours of a potential takeover at Goodison Park have provided some reason for hope, yet claims from Saturday’s O Jogo still feel questionable.

The Portuguese newspaper state Everton have the ‘financial conditions’ to move for Matheus Nunes this summer, having been linked to the midfielder for over a year.

Last summer there were claims Nunes was close to signing for Everton, for a fee of around €25m, only for that transfer to slip away. After a good season with Sporting CP, and his debut for the Portuguese national team, the 23-year-old is now worth more.

According to the claims, Everton could put ‘an amount over €40m’ on the table for Nunes, which would likely be enough to please Sporting. However, the player himself wants to be patient and see if any trophy chasing clubs enter the picture. 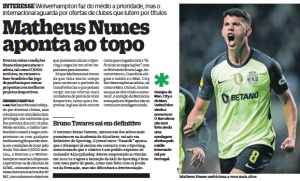 Wolves have also been linked, although Saturday’s edition of A Bola claimed they can’t make their offer official until Ruben Neves is sold.

Meanwhile, Nunes waits, hoping that a big European club will swoop for him.