Everton’s need for a right-winger isn’t exactly a secret, as Carlo Ancelotti only has an ageing Theo Walcott as the natural option in the role.

There have been links to a number of options to help the 60-year-old bolster his squad, with Hirving Lozano seemingly top of the list, at least according to Italian reports.

However, another name has been doing the rounds of late, and that’s AS Roma’s Cengiz Ünder, also being tracked by Arsenal and Tottenham.

The Turkey international could be on the market this summer as the club ‘plan to cash in’ on their asset this summer, and Corriere dello Sport explain the Premier League trio would be interested ‘if the market reopens’.

The Gunners and Spurs have been linked with a move for the young forward for years now, and while they might still have him on their radar, their need isn’t quite as great as Everton’s. 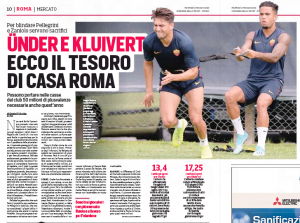 The Premier League clubs aren’t the only ones after him either, as Milan in Italy and both Bayern Munich and RB Leipzig in the Bundesliga are listed as potential landing spots.

That seems like a lot of big names for a player who has struggled to find form this year, but his talent was on display during the two previous campaigns, so it could be clubs are just writing off this season as a blip in what has been a promising career so far.

Should Tottenham, Arsenal or Everton want to purchase the player, he is expected to cost €25m, which would represent a tidy profit on an original €13m expenditure.