If all of the reports floating around Europe are to be believed, Everton’s search for a new centre-back is well under way.

Gabriel Magalhães, who plays for Lille, appears to be at the top of the list and the centre of their efforts for the time being, but we all know Marcel Brands isn’t just going to have one name on his list of potential candidates for a Goodison Park role.

Fast forward to early May, and that appears to still be the case, as Gazzetta dello Sport report Everton are still tracking the Albania international, and have taken first steps towards a transfer.

It’s stated ‘embassies’ from Everton and Spurs have ‘arrived’ in Verona over the past few weeks, although we all know that cannot be in person since all borders have been closed in Italy for a while.

Clubs wouldn’t be foolish enough to try and conduct business in person, so we can only assume said ‘embassies’ contacted the Serie A side via phone or email, but their interest has been noted. 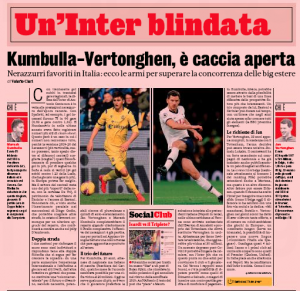 The price remains what it’s always been, around €30m, although Corriere di Verona on Thursday suggested €25-28m could be enough.

In these difficult times, clubs will be wanting to save money wherever they can, so if they can knock off one or two million here and there, that’s probably what they’ll try and do.

It needs to be pointed out, however, that Inter are also very active on Kumbulla, and could present the ideal step for the 20-year-old, who wouldn’t have to leave the country he was born in to improve his standing in the world of football, all the while giving himself time to try football abroad down the line.