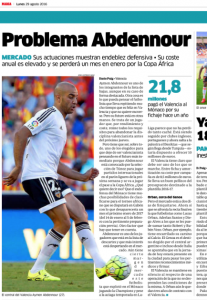 In the middle of August the Valencia media got very excited indeed about Everton interest in Aymen Abdennour. Valencia are keen to sell the defender, who arrived with great fanfare from AS Monaco last summer, and Everton interest was very welcome indeed.

Within days, maybe even hours, it went from some sort of interest, to claims Valencia owner Peter Lim was flying to England to close the deal. But then the transfer was ‘blocked’, with Marca saying Everton hadn’t actually made the expected bid.

Valencia wanted to get €20m to €23m for the player, but Everton clearly weren’t interested enough, if the reports of any interest were genuine, to go to those lengths.

Well, an interesting opportunity may be presenting itself for Ronald Koeman. Marca report Valencia are still very keen on a sale, wanting to get the player’s wages off the bill and try and get as much money as possible.

There’s been approaches from Turkey, but only for around €10m. That would make a figure of around €15m look very attractive right now for Valencia.

Abdennour could miss several weeks of football with Tunisia for the 2017 African Cup of Nations in January and February, which is a negative for interested clubs.

Whilst Abdennour’s one season with Valencia hasn’t been great, he was much wanted last summer and almost ended up at Chelsea.