Home Europe Everton can get signing for €50m – Big sum, but comes with...
SHARE

It’s now time for the Portuguese media to say something about Everton’s alleged pursuit of Porto winger Luis Diaz.

Following reports from England regarding the Toffees’ chase, newspaper Correio da Manhã features a story about it today.

They say Everton are just the ‘latest of the clubs’ who’ve been interested in the 24-year-old, as there are ‘many’ in England who’ve already been following him.

It also turns out that there’s good news for the clubs who’ve recently set their eyes on the winger, because Porto seem to have dropped their demands for his transfer, due to their need of making big sales. 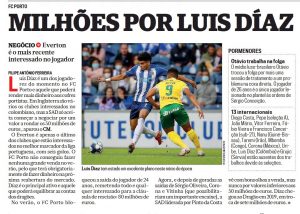 It’s said that back in the summer, the Dragons ‘blocked the player’s departure’ by demanding the triggering of his €80m release clause. This time, however, the club are accepting to start negotiating from €50m.

Luis Diaz was the top scorer in Copa America this year and that’s what started attracting interest from other European sides. Now with six goals in 10 appearances in this start of season, he could be about to have his best campaign ever.