Home Europe Everton bid for star would be €5m to €10m more than Tottenham...
SHARE 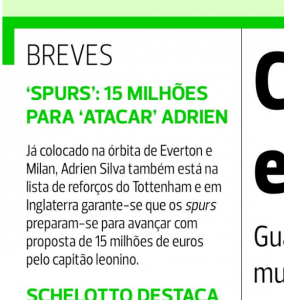 It’s no surprise that Tottenham Hotspur links to Adrien Silva have found their way to Portugal.

The claim started in France, which would normally be a surprise for a Portugal based Portugal international, but Adrien was born in France and his agents are based in the country.

France’s L’Equipe explained that Tottenham were very interested but that before submitting an offer, which the newspaper believed to be around €15m, they had to sell some players.

That then ended up in several English newspapers, and Portugal’s A Bola have picked it up, pointing out that Everton are interested too.

Everton were linked with both Adrien and his Sporting teammate William Carvalho a couple of weeks ago, and it was claimed they were willing to offer €20m to €25m for each.

That wasn’t considered to be enough for either, so it must be considered Tottenham’s €15m would stand no chance.

Adrien is 27 years old, one of Sporting’s best players and did well for Portugal at Euro 2016, €15m was never likely to cut it.