Home Premier League Everton Everton ‘have asked’ about signing Barcelona player, but that’s all it is...
SHARE

Everton are showing an interest in Barcelona forward Munir El Haddadi, according to claims in the Spanish media.

Mundo Deportivo have today reported Munir could again be offloaded by Barcelona in the next window, following the player’s loan spell with Valencia last season. The forward failed to shine at the Mestalla, and Valencia have backed away from using their clause to buy Munir for €12m.

The Spanish club may be interested if that price drops, but given their precarious financial position, Valencia won’t dish out the money.

This has led to speculation over Munir’s future with claims Everton ‘have asked’ Barcelona about the youngster. 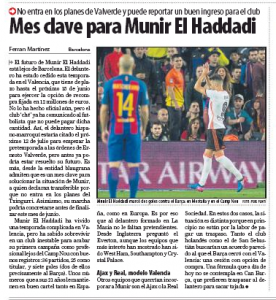 Everton interest looks at a very early stage, with even Mundo Deportivo pointing out their efforts haven’t gone past the asking for information stage.

Other clubs are thought to be more interested at the moment, and more likely to sign Munir, whether than be on a loan or permanent basis.