Claims regarding Premier League interest in Mattias Svanberg have been growing in the Italian media.

On Tuesday, we covered a report which stated Leicester City and Southampton are keen on the Bologna player, and that the midfielder’s value now stands around €15m.

Wednesday’s edition of Il Resto del Carlino, a newspaper local to the Bologna region, brings Everton into the picture. It’s explained Carlo Ancelotti’s side have appeared on the scene for Svanberg in the ‘last few hours’, with their interest becoming known.

Southampton get a mention again, but there’s no Leicester City this time. Instead, Burnley and Brighton & Hove Albion are pulled into the mix, although it’s Everton’s given slightly more attention.

Svanberg’s contract with the Serie A club expires in June 2023 and they’re currently trying to get the 22-year-old to renew his deal. Things aren’t going perfectly in that regard, and the player’s agent is seeing whether interest from elsewhere will turn into something more concrete. 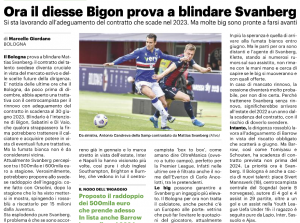 Il Resto del Carlino accept that the clubs mentioned would be able to offer a higher salary than Bologna.

There’s every chance Premier League sides are being dragged in so that the Italian club feel pressured into going higher on wages than they otherwise would have.