Liverpool are running out of time in their efforts to retain Georginio Wijnaldum after this season.

The midfielder’s contract expires on June 30th and reports stated he has turned down renewal offers made by the Reds.

Without a new deal, the 30-year-old will be available on a free transfer in the next market and he has already been linked to a handful of top clubs.

Bayern Munich were handed an opportunity to sign the Netherlands international in the summer, according to Abendzeitung- Muenchen.

The former Newcastle United man is ‘about to say goodbye’ to Jürgen Klopp’s side as there’s been no agreement over an extension so far. 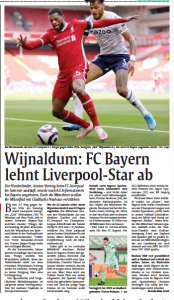 Hansi Flick’s side want to strengthen their midfield and it’s claimed the 30-year-old was ‘recently offered’ to the Bavarian club.

The Bundesliga winners rejected the possibility to sign the Dutchman due to his age and high salary demands. These two factors have ruled out Wijnaldum’s potential arrival at the Allianz Arena.