Manuel Locatelli has starred for Sassuolo this season and his impressive performances helped him to make his debut for Italy last September.

The midfielder’s fine displays have also caught attention of top clubs in Italy and across Europe. Manchester City are among them and the Citizens’ interest in the midfielder has been confirmed by his agent.

That’s according to Thursday’s edition of Mundo Deportivo, who focus their report on the La Liga side.

It’s claimed the Catalan club have been looking for a young midfielder to become a long-term replacement for Sergio Busquets.

Regarding Locatelli, Mundo explain the Camp Nou side have been tracking him for the last two years. 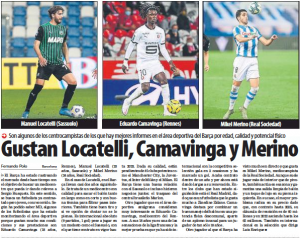 Pep Guardiola’s side get a mention as Mundo state given Locatelli’s ‘quality’, powerful clubs’ like City, Juve, Milan and Inter are ‘waiting for him’.

Mundo’s report would indicate that Barca would have to battle with Manchester City and Serie A sides if they want to take Locatelli in the summer.