Denzel Dumfries is having a brilliant Euro 2020, and that’s inevitably seen transfer interest build in the Dutchman.

Prior to the tournament, Everton were said to have a keen interest in the PSV player, yet now it’s believed his fanbase is on the up.

In 30 Eredivisie matches last season, Dumfries scored two goals, and he’s already matched that in just two outings for the Netherlands at Euro 2020, with goals in victories against Ukraine and Austria.

Sunday’s edition of Sport dubs him ‘The Euro Express’, and they call him a ‘surprise’ and ‘revelation’ of the tournament.

Being a Catalan newspaper, Sport will be looking at this from a Barcelona perspective, and they point out it was Ronald Koeman who gave the right-back his debut for Oranje. There’s no outright claim of Barcelona interest, yet the link will soon be made if Dumfries continues his national team form. 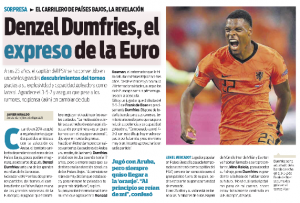 Everton get a mention, and it’s stated the Toffees have already called the player’s agent, Mino Raiola, regarding a transfer.

However, they’re not the only ones, with Bayern Munich and Inter Milan said to have done the same. Should Everton be serious about this one then they likely need to hurry and get the signing done before the competition takes the chance away from them.