Josh Maja has less than six months left on his contract at Sunderland and it looks like the forward is set to leave the Black Cats in the winter market.

The 20-year-old is expected to complete his transfer to Bordeaux and according to today’s edition of L’Equipe, the Ligue 1 outfit will soon seal the deal for him.

It is explained that apart from Les Girondins, the Englishman is the subject of interest from several clubs, and is ‘especially followed by Tottenham’.

The north London club were keen on securing the services of the player and he wouldn’t have cost them a lot since his contract at the Stadium of Light will expire in the summer.

Mauricio Pochettino’s side will likely miss out on Maja and the attacker will join the French club after the they reached an agreement with Sunderland. The player will sign a four-and-a-half year contract with Bordeaux.

If Spurs had signed Maja, he could have helped them in the attack in the absence of injured Harry Kane and Dele Alli, who will be out of action until early March. Although that may have been asking a lot given his age. 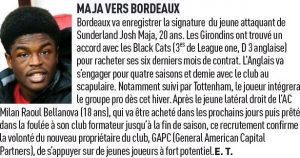 Maja has scored 15 goals in the league for Sunderland this season.