Awarded the prestigious title of Best FIFA Men’s Goalkeeper on Monday evening, Alisson Becker once again got the recognition he deserved for his great 2018-19 campaign.

The Brazilian was instrumental in helping Liverpool win the Champions League title last season, and only a magnificent Manchester City side coached by Pep Guardiola stood in his way of lifting the much coveted Premier League trophy.

The goalkeeper is also his country’s number one option under Tite, ahead of Ederson, as he played every single minute of every single game in Brazil’s 2019 Copa América win.

This form and ability has earned him plaudits throughout the globe, including with his compatriots, as former QPR, Inter and Benfica shot stopper Julio Cesar (87 caps) was nothing but full of praise for the 27-year-old in an interview with Gazzetta dello Sport. 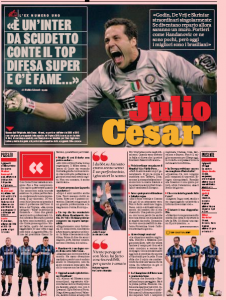 Asked by the newspaper if he felt Brazilian goalkeepers were the best in the world right now, he said: “Yes. Alisson and Ederson are extraordinary, especially Alisson who won the Champions League and has done great things with Liverpool. And then Helton at Porto, Diego Alves when he was at Valencia, Aurelio Gomes when he was at PSV.

“A good class these past few years. When I arrived in Italy, it was said that Brazilian goalkeepers were all poor”.

Times have changed since the 40-year-old was last on the pitch, as he now resides in Lisbon, returning there after a very brief stint at Flamengo back in Brazil.

The way things are going, both Ederson and Alisson are expected to dominate the role for years to come, with only a couple of Germans (ter Stegen and Neuer), Jan Oblak and maybe David De Gea (if he finds his form once more) potentially stealing their crown in the foreseeable future.