Home Europe Eriksen ‘suggested’ two players to Tottenham, club has ‘no choice’ but to...
SHARE

Ajax star duo Matthijs de Ligt and Frenkie de Jong are on the radar of top European clubs and these sides will compete against each other for their signatures.

Mundo Deportivo once again talks about Barcelona’s interest, but claims the Eredivisie side’s sporting director Marc Overmars is unwilling to negotiate now because he is aware the two can be auctioned next summer.

The Catalan newspaper suggests the Blaugrana will face competition for the defender and the midfielder and one of the clubs mentioned is Tottenham Hotspur.

Dávinson Sánchez, Jan Vertonghen, Toby Alderweireld and Christian Eriksen have all played for Ajax in the past and Mundo claims the Danish international has ‘suggested’ the names of De Ligt and De Jong to Mauricio Pochettino’s side.

The Spurs star knows them from his time at Ajax, it’s claimed, and the duo were in the academy when the 26-year-old was playing for the Amsterdam-based club’s first team. 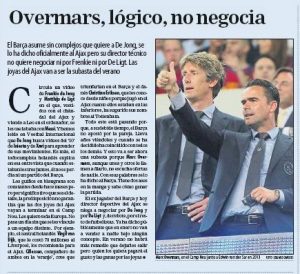 Whether the north London club will consider Eriksen’s recommendation or not is to be seen.