Neil Lennon stepped down from his position at Celtic on February 24th after initially insisting he would not resign as the Bhoys’ manager.

John Kennedy has been appointed by the club as the interim boss at Celtic Park. Several candidates have already been linked to the Celtic job as the Hoops continue their search for Lennon’s permanent successor.

Manchester City U23 manager Enzo Maresca is linked with the Scottish Premiership job, even though he is yet to manage a club at the highest level all by himself.

The 41-year-old worked as an assistant at Sevilla and West Ham United in the past.

He was Manuel Pellegrini’s assistant at the London club and moved to Manchester in February 2020, months after the Hammers sacked the Chilean.

Today’s edition of Gazzetta dello Sport has published an interview with Maresca, where he details how the City job materialised.

Maresca, who continues to be linked with the Celtic job, reveals it was tough for him to turn down the opportunity to manage the Citizens’ U23 side.

“It happened 13 months ago. Pellegrini had just been sacked from West Ham. I was the assistant, I tried to take advantage of my free time to study Pep’s football,” Maresca said.

“The academy idea was later. There was some initial doubt, related to the situation of my staff, but we solved the problems, I accepted. I was offered a unique chance.”

Maresca is clearly a fan of Pep Guardiola and his methods. At City, the Italian tries to closely follow the former Barcelona manager, and these factors would only make it difficult for Celtic to appoint him, if they made an attempt.

“The first meeting [between Maresca and Guardiola] took place after a Barcelona-Malaga match. Pep told me about the times of Brescia and Mazzone,” he explained.

“In Manchester the relationship was consolidated. We have different training schedules and when I can I follow his work closely.”

When asked what’s striking about ‘seeing Guardiola on the pitch, he said: “The continuous search for solutions and energy. The Premier League wears out, but he every day comes into the pitch with an incredible charge.” 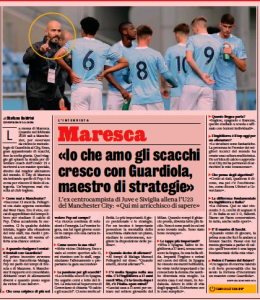 The United Kingdom seems to be the best place for a manager to work, according to Pellegrini’s former assistant.

“The facilities are fantastic. The presence in the Premier League of the best manager in the world has created a multi-ethnic culture. I have an idea of ​​football and joining City allowed me to enrich my knowledge,” Maresca stressed.