Wednesday’s edition of Ekstra Bladet has something rather nice for Tottenham fans: an interview with Pierre-Emile Højbjerg.

The Danish midfielder has been one of the big successes in a rather mediocre season by Spurs’ standards in the league, and that’s entirely down to the hard work and adaptability the player has shown.

Ekstra Bladet make that clear by explaining that both Kasper Hjulmand and José Mourinho agree on one thing, and that’s ‘you can trust Pierre-Emile Højbjerg’.

Speaking of his place in the squad at Tottenham, he said: “I am happy with and satisfied with the role I have, and I always feel ready to fill it out. Things feel right. I’ve gotten older, more experienced and I feel sharper in terms of what I can give to the team. Not only in terms of play, but also on a human level”.

Focusing on the ‘maturity’ he’s acquired over his years at Southampton and Tottenham, he believes he’s ‘become a more complete athlete’.

Described as ‘one of the best purchases of the season in the Premier League’, Højbjerg feels his development ‘has been positive’, with his decision to take responsibility always occurring to him ‘naturally’.

He continued: “I switched to a bigger club, where I have grown with the task. I also transfer that to the national team, to a possible extent. I am who I am – and I am both in the club and on the national team”. 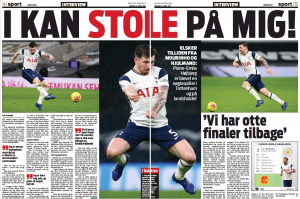 ‘Grateful’ to both Hjulmand and Mourinho for what they have given him, Højbjerg knows that the second half of the campaign at Tottenham hasn’t gone to plan.

He added: “If you compare with December, when we were at the forefront of everything, it looks different, but I don’t want to pain hell on the wall. We are in the final of the League Cup and top four isn’t impossible. We have eight final lefts.

“It has been a year with many fights, many travels. We may have suffered a little from that. There have been some crucial moments where we have paid the price for it. If you are not prepared to fight for every metre or ball, you will be punished. That’s the great thing about the Premier League”.

For him, ‘that’s what comes with playing for a big club like Tottenham’, and he’s ‘convinced the future is bright for Spurs and the national team’.