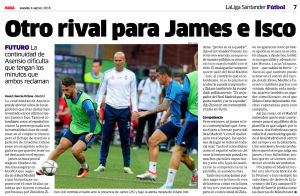 Last month there was talk in Spain that Real Madrid had rejected a €85m Manchester United bid for James Rodriguez. At the time it seemed strange, because Real Madrid would surely be likely to accept the money for a player who hasn’t hit the heights Madrid hoped for and is often portrayed as something of a misfit.

Nevertheless, Madrid apparently said no. Perhaps the reports were to put two fingers up at Manchester United, because they were likelier to get Paul Pogba. That would be another reason a rejection was strange, it would have been Pogba funds.

Anyway, Marca report on Thursday that the rise and rise of Marco Asensio means more competition for Isco and James, and they believe it’d be best if one was to go.

Again it’s stated an €85m bid from the Premier League was turned down. They’re surely hardly going to get much more.

Isco is now less likely to go to Manchester City, say Marca, because of Leroy Sane. It was hard to see Pep Guardiola buying a player who has had doubts placed over his effort and ability to adapt.