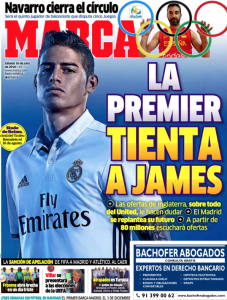 Colombian star James Rodriguez is facing an uncertain future at Santiago Bernabeu, after being overlooked continuously by Zidane last season.

According to Spanish newspaper Marca, Real Madrid have put a price tag of €80m on Rodriguez.

Marca say the chances of Rodriguez leaving the Santiago Bernabeu are increasing day by day, and Manchester United are well ahead of others in the race to sign him.

It is reported the player could still stay at Real Madrid should he change his attitude, but the door is certainly open for him to leave.

Several clubs have asked for the possibility of signing Rodriguez, and have even offered upto €60m for the player.

Real Madrid, however, believe they can even get €80m for the Colombian. Marca say Chelsea, Paris-Saint Germain, and even West Ham could offer big money for the player.

Rodriguez is expected to travel to Montreal on July 26th, where Real Madrid are hosting their pre-season training.

Marca say a meeting is scheduled to take place in Montreal over the future of Rodriguez, and then Jorge Mendes will act accordingly.

It’s not the first time the Spanish media have a big story on the future of Rodriguez in the last few months.

It remains to be seen if any Premier League club are ready to spend that sort of money on the Colombian this summer.