Everton and West Ham United continue to be pointed out as possible destinations for Porto striker Moussa Marega.

As written in newspaper A Bola, both clubs have reports from their scouting departments which approve the signing of the 27-year-old.

There’s no information on when or if Everton and West Ham will bid for him in the summer, although the article makes it clear that he’s well known by the Premier League sides.

The outlet says the player is not thinking of a transfer now, as his focus is on the end of the season with Porto, as he can finally win a league title for them. These words have been said by Marega’s agent in an interview with A Bola recently. 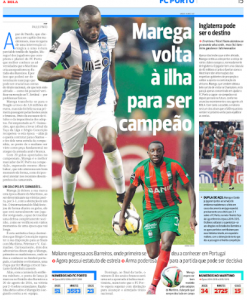 What the interested clubs should know is that Marega is a big deal at Porto right now.

As you can see in the image attached, just his return from an injury gets an entire page in A Bola.

With 22 goals scored this season, Porto will demand a lot for the striker, and his €40m release clause will certainly be his tag price.