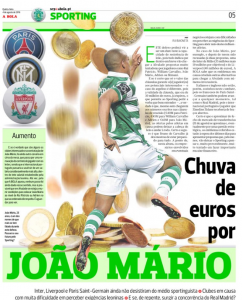 Liverpool have reportedly not given up on signing João Mário yet.

A Bola says the Reds are still on the race for the midfielder, alongside Inter Milan, PSG and Real Madrid.

According to the newspaper, even after having a €40m bid rejected, Liverpool are still thinking of a way to convince Sporting to sell the player, and that would be by making an offer too good to refuse.

João Mário has a €60m release clause. The Portuguese side don’t expect to get all that amount for the 23-year-old, but are still pushing for a few more million.

Sporting’s plan would be to renew João Mário’s contract, especially after the player’s father publicly said his son deserved better. But with so many big clubs after him, it’s possible that he will force his way out of Portugal.

The player’s own father confirmed Liverpool’s approach in July: “João had two concrete offers. One from Inter, which was 35 million plus 10 million for objectives. That would be 45 million euros. The club refused. Have I ever pressed the club to accept the bid? Did I make any noise? Never!

“And, after this refusal, I’ve been at the club twice. Then they received another bid, now from Liverpool, of 40 million euros, without objectives. The club refused again. Has someone seen me going to the club to say something that they were obligated to accept?”

Liverpool interest has always been somewhat surprising, especially at the prices quoted, but this one refuses to go away.