According to the outlet, the Giallorossi have just made a €25m bid for the striker, the same amount they believe Spurs have recently offered.

Altough the amounts are exactly the same, Corriere explains that it’s not only a matter of numbers, as several other factors could weigh on Ajax’s decision, like the payment methods and the relationship between the clubs.

But in case Ajax leaves the decision for Kluivert to make, then Corriere dello Sport believe it’s the Italian side who should have some advantage in the race. 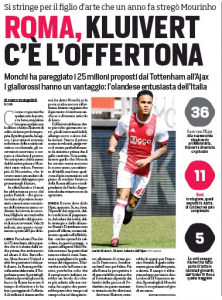 The Italian newspaper claims that Kluivert believes he would have a better development in Italy, making Roma stronger in the race.

As has often been the case in the past, a chat with Mauricio Pochettino could help change things, as could the previous success of the Ajax to Tottenham route.