Diego Costa to Atletico Madrid was set to be completed last week, according to a multitude of reports. The Chelsea striker had arrived in Spain and all was imminent.

It was all assumptive nonsense, from media outlets trying to get ahead of each other. Costa hadn’t arrived in Spain, or anywhere in Europe, he’d skipped the flight from Sao Paulo which was supposed to take him to London to sort out his Chelsea mess, preferring instead to hide out in Brazil for as long as possible.

Marca have what they present as an update on Monday, and to be fair to the Spanish newspaper, some of the claims feel new. Atletico are willing to pay Chelsea €55m plus a 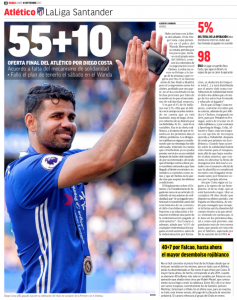 further €10m in bonuses, and whilst that’s thought to be fine, it’s the solidarity mechanism which is holding things up.

Clubs are due a percentage of transfer fees for helping to train players, and the initial payment on Costa would be €2.75m, however, Atletico want Chelsea to pay that amount.

The Premier League champions obviously want Atletico to pay it, and that’s the latest hold-up, oh, and Costa still hiding in Lagarto.