It’s no secret that Manchester United midfielder Andreas Pereira is a supporter of Brazilian side Santos. In several interviews, he’s insisted he continues following the club and expects to play for them one day.

Since the player belongs to one of the richest clubs in the world, the South American side never really tried his signing seriously, but the recent scenario seems to have encouraged them to make new contact.

Andreas Pereira has just had a loan spell at Lazio and is now returning to Old Trafford. He’s unlikely to be in Ole Gunnar Solskjaer’s plans for next season, and Santos president Andres Rueda thought it’d be a good time to ask about the chances.

“I contacted three players. I knew it was difficult, but I called out of curiosity,” Rueda told De Olho No Peixe (via Globo Esporte). 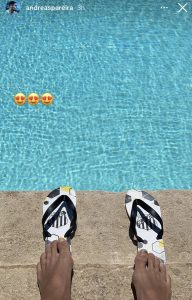 He revealed that he got in touch with Manchester City’s Fernandinho and West Ham United’s Felipe Anderson as well. And had no problems revealing the monthly salary of each one.

That’d be too much for Santos, who haven’t even opened talks for the move.

Andreas Pereira’s contract with Manchester United runs until 2023. Claims from Italy have been saying that Lazio could try to keep him, even though they may not have the conditions to go for a permanent deal this summer.

On Thursday, the player posted a story on Instagram showing he was wearing Santos flip-flops during his vacations.