Adama Diakhaby and Isaac Mbenza joined Huddersfield Town from AS Monaco and Montpellier respectively in the summer of 2018.

Mbenza initially joined the Terriers on a season-long loan deal with an option to make it permanent, which the English club exercised before the start of this campaign.

The duo are set to leave the Championship side in the winter market, claim L’Equipe, and Nottingham Forest, Fulham and Bournemouth could be their next potential destinations.

Diakhaby has failed to find the back of the net in the league and is expected to join Nottingham Forest on a loan deal with an option to make it permanent. 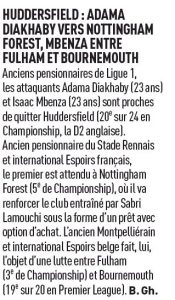 Mbenza has been restricted to two starts in all competitions for Huddersfield. The Cottagers and Eddie Howe’s side are set to battle it out for the 23-year-old’s signature.

The newspaper doesn’t make it clear who between Fulham or Bournemouth will win what is described as a ‘fight’.

Diakhaby and Mbenza will be leaving Huddersfield after spending 18 months at Kirklees Stadium.