Gazzetta di Modena are pretty much besides themselves on behalf of Carpi over the Jerry Mbakogu saga.

Whilst the Serie B club have been informing their local press there’s no huge development either way on the deal and nothing ‘in black and white’, claims elsewhere are sending the local newspaper around in circles.

They say first there was calm brought by a report from Gianluca Di Marzio of a €1.8m fee being agreed between Leeds United and Carpi for the sale of the striker, and that made everything seem a lot better, even if at less money than previously thought.

Now, they’ve picked up claims from England that the €1.8m agreement may not be true, doing some digging Gazzetta di Modena have then found it’s only a ‘verbal’ thing, with neither club committed to anything at this stage. 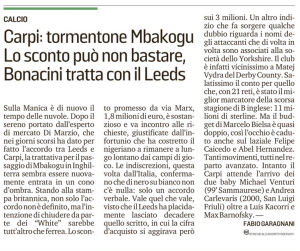 That means Mbakogu remains a Carpi player, at least for now, and the Italian club still have their summer business up in the air.

Leeds United being linked with an increasing number of strikers is also causing panic, and now it’s stated that a storm has followed the calm.