Manchester United interest in Sergio Reguilon was reported repeatedly by the Spanish media in recent weeks, but the move never felt as imminent as some there were suggesting.

This week saw Tottenham make their attempt, and the left-back is now expected to join Spurs for around €30m. Real Madrid will have a €40m buyback clause they can use over the next two years.

Manchester United were set against any such clause, which would have killed their chances of a deal, even if they were as keen as suggested.

Another left-back to be linked with a move to Old Trafford recently is Alex Telles. The Portuguese press have been reporting that his agent, Pini Zahavi, has been trying to build a deal with the English club.

Such a scenario makes sense. Zahavi has a client who wants a big transfer, Porto are ready to sell, and it seems United want a left-back… if he wasn’t trying to make the move happen then he wouldn’t be doing his job.

Thursday’s edition of A Bola states the doors for Telles to join Manchester United are now ‘wide open’ after the Reguilon option was closed. 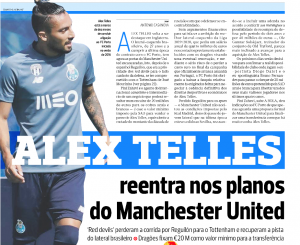 Porto are ready to accept €20m, given their player’s contract expires in less than a year.

The coming days will be ‘decisive’ to see if Ole Gunnar Solskjaer’s side are going to make the move Zahavi wants them to.

A Bola believe the agent is confident, and it’s stated he’s already ‘indicated’ to Porto that he expects a formal offer soon.