Iké Ugbo came up through the ranks of Chelsea’s youth system, but has so far failed to find his way into their first team.

Since the start of the 2017/18 season, the forward has been out on loan. He has had temporary spells at Barnsley, MK Dons and Scunthorpe United, before joining Dutch side Roda JC Kerkrade in the summer of 2019.

The Blues allowed the 22-year-old to join Cercle Brugge last summer and the Belgian side retain an option to make his stay permanent for €5.5m.

Ugbo has impressed in the Jupiler Pro League this season, netting 12 times in 29 matches.

Het Nieuwsblad spoke to the Chelsea owned player, where they discussed various topics about his career so far. Ugbo admitted he is unsure of where he will play next season after making his Premier League dream public.

With regards to the purchase option available for Cercle Brugge, he said: “At the end of the season it will become clear what will happen with that. 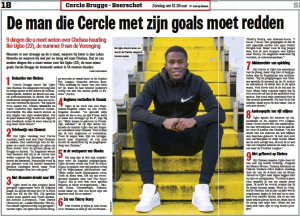 “I don’t really have a career plan in mind. But if I’m really honest, I do dream of making the step to the Premier League next season.”

Without a contract extension, Chelsea are likely to cash in from Ugbo’s sale in the summer in order to not let him leave for free in 2022.