If all goes to plan, and Liverpool don’t collapse like Barcelona did in Rome, Jürgen Klopp’s side will be in the Champions League final to play Real Madrid come the end of May.

Winning the first leg of the semis with an impressive 5-2 win against AS Roma, the Reds simply need to avoid conceding three goals, but there’s little chance of the German manager parking the bus for 90 minutes.

That’s why there will undoubtedly be goals, since the Italians are expected to start on the front foot, but they could come at either end, especially if Mohamed Salah has his way once again.

There’s nothing we can say about the Egyptian star that hasn’t been said 100 times before this season, such has been his form with the Premier League side.

One of the most endearing parts of the Liverpool forward’s game is his ability to make everything look so easy, seemingly unperturbed by any sort of pressure he or his team might be under.

Perhaps that has something to do with the two years spent at AS Roma with a “Sword of Damocles”, as L’Equipe put it, looming over his head, being told he could face a ban due to his transfer to AS Roma from Chelsea, with Fiorentina believing they were due €32m in compensation for breach of contract. 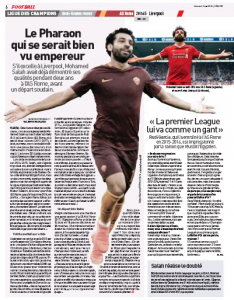 As Walter Sabatini, Roma’s former director of football, told the French newspaper: “That didn’t influence him. As early as October, we went to Florence in extremely hostile circumstances on the pitch, and he scored an incredible goal after a few minutes.”

A lot of Salah’s success is also down to those who surround him, including his representative, lawyer Ramy Abbas, who did everything in his power to get his client the move to Roma.

Sabatini continued: “His representative adopted our cause and worked a huge amount to sort out the dispute. During our first meeting in London, Mohamed was training by himself.

“It was a very late dinner, as we were mid-Ramadan, and he hadn’t drank a drop of water for the whole day despite his physical effort. That’s when I understood the incredible will of this extraordinary kid.”

All of this life experience and hard work will have helped him become the player he is today, and Liverpool are reaping the benefits of a well-timed deal, now seen as a huge bargain following the transfer market’s explosion last summer.