As was explained in Gazzetta dello Sport on Tuesday, Roma are pretty relaxed when it comes to the Riyad Mahrez situation.

The Italian newspaper explained that despite other clubs, namely Premier League ones, circling around the Algeria international, the fact none of them had made a bid suggested there wasn’t much danger of the Serie A side losing out on their target.

Furthermore, the longer they wait, the more Leicester could be willing to lower their demands as the last thing they’ll want, regardless of his ability, is have to deal with a player who doesn’t really want to be at King Power Stadium for an entire season, or at least until January.

Gazzetta said Roma’s second offer for the player could arrive in the first few days of August, but Wednesday’s edition suggests that bid could come even later, closer to when the Premier League season kicks off.

After all, Mahrez has already said yes to their contractual offer, and the forward is prepared to wait to get his move, knowing full well everything is now out of his hands.

Another thing going Roma’s way in all of this is Monchi’s friendship with Leicester’s head of recruitment Eduardo Macia, one Gazzetta describe as ‘deep’, developed over many years. 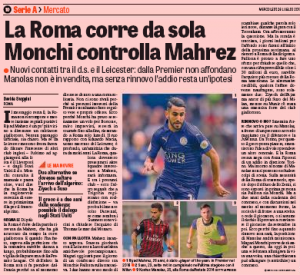 This relationship means the Serie A side know they’ll be informed if any Premier League clubs came knocking on Leicester’s door with an offer, as the former scout would let his best mate know all about it.

The Serie A side’s chairman, James Pallotta, is said to be ready to make the Leicester star the club’s record signing, and today could see him and Monchi sit down and discuss everything in detail.

Based on this article, it seems Mahrez to Roma is only a matter of time, but we all know that nothing is ever definite in the transfer market until the player is sat at that table, signing his contract, binding his soul to a new club for a minimum of six months.