Bologna lost 3-1 to Sassuolo on Sunday, and it’s caused some anger around the club.

Monday’s Corriere di Bologna has a front page suggesting the club’s players have already gone on holiday, such was their performance at the weekend.

The focus is being sent to several people, and one of those is Riccardo Bigon, the sporting director. The newspaper suggests that Sunday’s loss could have been his last game as an employee of Bologna, as he could be shown the door despite having a year of contract left.

This could all make transfers more complicated and have an impact on Arsenal’s pursuit of Aaron Hickey. The 19-year-old has been repeatedly linked to the Gunners in recent weeks, with it thought Mikel Arteta is keen on the player.

Bigon travelled to London last week, and the report says he ‘collected a potential proposal’ from Arsenal, which is valued at €20-25m. That offer hasn’t yet been officially made, and if Bigon goes then it’s likely the process will take a step or two back. 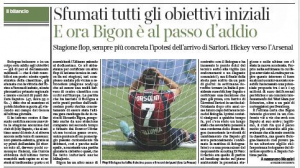 It’s worth keeping an eye on Bologna to see if this is all just a tantrum over Sunday’s result, or whether the club is set for serious change.