As part of their Mesut Ozil to Barcelona spread on Tuesday, Mundo Deportivo have a separate article explaining the background to what they believe could be a €20m January transfer.

The Catalan newspaper state Ozil and his agent Erkut Sogut have ‘direct permission’ from Arsene Wenger to find a new club for the January window, therefore ensuring Arsenal get a transfer fee rather than see the German leave for nothing.

Sogut has held talks with Barcelona, according to the claims, and Ozil is said to want a contract for the rest of this season and two more. In contrast, it’s claimed Barcelona would prefer the third season to be up for later negotiation, given Ozil is 29 years of age.

That doesn’t make perfect sense. Ozil turned 29 in October, if Barcelona only want to offer a contract for the remainder of this season and the one after, that takes the footballer to 30 years of age… it’s not exactly retirement time. 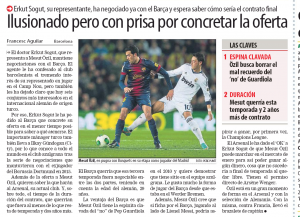 Mundo Deportivo state Sogut already has good contacts with Barcelona, after previous talks for a potential Ilkay Gundogan transfer. Those contacts have been reopened, and the agent now wants a firm offer over the length of contract.

There’s said to be excitement around the potential move, but Ozil and his agent are ready to move on if Barcelona drag things along too much. On that note, Sogut has informed the Catalan club that other clubs are interested in a January deal with Arsenal.

Arsene Wenger being content to let Ozil’s agent go and find a new club will be difficult for some to believe.