For the past few days, we’ve seen Porto star Luis Diaz becoming one of the main names of the rumour mill, will Everton pointed out as one of the contenders for his signing.

It’s been recalled by the Portuguese media that the Toffees wanted his transfer in the summer, and now that their scouts watched him scoring against Bayern Munich in the Champions League, the rumours are back.

Now Diaz’s situation at Porto is explained by newspaper Correio da Manhã, who claims that he may indeed leave the club very soon.

The outlet writes that it will be ‘very hard’ for the Dragons to keep the player in the next transfer window. There have been many approaches for his signing, and the club now live a ‘dilemma’ regarding selling him in January or keeping him for the rest of the season.

A crucial point for their decision will be the Champions League. In case they qualify for the knock-out stage, then it’s more likely that Porto will make an effort to have him in the squad. 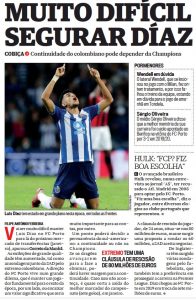 Correio da Manhã writes that many approaches have been coming from England, and the Premier League is indeed the player’s preference.

Even though Diaz is protected by a release clause of €80m, it’s now said that Porto would accept negotiating from €60m.

While that is quite the discount, that is still likely far too much for Everton, where Marcel Brands is having to navigate tricky FFP waters this year, as shown by the Goodison Park side’s cheap summer transfer window.

The striker has seven goals in 11 appearances this season. He’s drawn big attention during the Copa America, where he was the tournament’s top scorer and had goals against Argentina and Brazil.