It was a time when you were being linked to players like Kara Mbodj, who was then at Anderlecht, attracting interest from a number of clubs in the Premier League.

Leicester and Crystal Palace were also said to be keen on the towering centre-back, but it’s actually the Hammers who came the closest to signing him before deciding to walk away.

The player, now at Al Sailiya Sport Club in Qatar, sat down with Nord-Éclair in Belgium, where they pointed out that he was currently ‘a thousand leagues away from his Premier League dream’.

He said: “It was my dream, but looking at the state of my knee, it was impossible. It was very close. The last time, it was West Ham where I went for three days of tests, but they didn’t want to take the risk”.

Kara also revealed he came close to joining Leicester during the 2017 Africa Cup of Nations, and feels he would have passed the medical, but the Anderlecht manager at the time stood in his way. 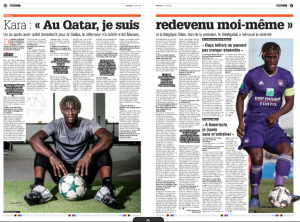 The Senegalese defender explained René Weiler told Herman Van Holsbeeck, the Belgian side’s general manager at the time, that he felt that if his star was sold, the league wouldn’t be won.

He explained the ‘worst mistake of his career’ was to force the issue with playing in the 2018 World Cup, which he eventually ‘paid for dearly’ by further worsening his knee issues, eventually costing him moves to both London Stadium and King Power Stadium.