Relegated to the Championship and unable to sell Sander Berge, Sheffield United had to make do with cashing in on Aaron Ramsdale when Arsenal came knocking and a bunch of incoming loans.

The Blades didn’t spend a penny in the transfer market, signing Robin Olsen, Conor Hourihane, Morgan Gibbs-White and Ben Davies on temporary deals, but the first on that list comes with a clause.

AS Roma decided they still wanted to make some money from any deal involving the Sweden international, and Il Tempo explain that while the goalkeeper has arrived at Bramall Lane on a loan, there is an ‘option to buy’ if they so wish, as well as ‘a few bonuses linked to the appearances’ of the player.

Furthermore, Sheffield United aren’t paying all of his wages, with Roma paying ‘part of the salary’ during his time in England. 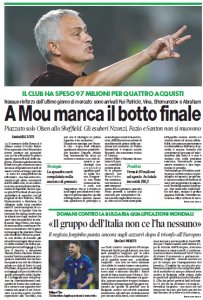 All in all, a rather good deal for the Blades, who have brought the player in to play, meaning they know full well some money will be exiting their bank account at some point in the season to land in the Italians’.