Following those initial reports on Thursday claiming Norwich City reached an agreement to sign Marcelino Nunez from Universidad Catolica, Chile’s press now comes up with more details on the move.

Newspaper La Tercera today features a story explaining how the talks went. It’s said the Canaries followed the player ‘for a long time’ and had a ‘detailed analysis’ made by their scouting team.

Norwich City reportedly made direct contact for the signing, with the negotiations starting a few weeks ago. The first bid had been around US$3m (£2.5m), and Universidad Catolica worked to get to a better deal, which was closed for US$4m (£3.3m), with the Chilean side having 20% of a future sale.

It’s said that the South American club had no plans to sell Nunez this summer. But besides the good offer that arrived, the player’s wish also had a heavy weight on the decision. 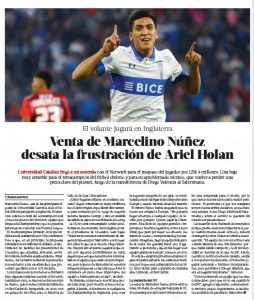 According to La Tercera, the midfielder is travelling to England for his medicals next week. So he’s still available to play for Universidad Catolica one last time on Saturday.

The 22-year-old was a very important player for the Chilean club, and the local reports can’t stop talking about the ‘frustration’ from manager Ariel Holan at losing him in the middle of the season.