Manchester City have still not made an official bid for the Sporting goalkeeper Rui Patrício, according to reports from the Portuguese press.

On Sunday, Duncan Castles from the Daily Record claimed that Pep Guardiola is interested in the 28-year-old to replace Joe Hart, after the Englishman was dropped in the first Premier League game of the season against Sunderland last Saturday.

Patricio has been linked repeatedly to Manchester City this summer, by the Portuguese press, so the claims were no surprise. 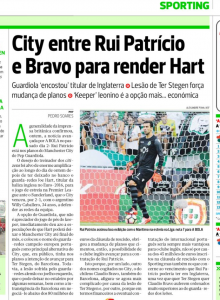 That’s why O Jogo have their on take on the situation, saying that no formal offers have arrived to Sporting so far. Other local papers such as A Bola and Diário de Notícias have published Record’s information as well, but without any news to be added.

Rui Patrício has a €45m release clause, but it’s been said in Portugal that €20m should be enough to take him, as long as the goalkeeper shows that he wants the move.

The Euro champion recently said he doesn’t “have the obsession to leave Sporting”, but the offers to leave will be “thought about by him and the club”.