Celtic players being slammed by a European newspaper for their performance level isn’t a new thing. Spanish newspapers have had fun with it previously, sending thinly veiled insults the way of Celtic players, and this season France’s L’Equipe have already got in on the act, slating Brendan Rodgers’ men after the PSG match.

Now it’s the turn of German newspaper Bild, who clearly weren’t impressed with Celtic during the Scottish Premiership club’s 3-0 away defeat to Bayern Munich.

Bild’s player ratings are very different to what we’re used to. Whilst most ratings are out of 10, or sometimes 5, Bild use the German school grading system.

1 means very good, 2 is good, 3 is average, 4 is passable but still lacking, 5 is deficient and 6 is insufficient. A 6 is the lowest possible grade and, taking it back to the school grades, it means that not only were things not up to standard, but there was even a 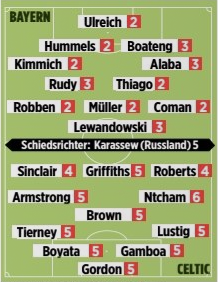 failure to understand the basics.

With that in mind, Bild don’t throw the 6 grade around a lot.

Well, Olivier Ntcham has managed to reach that level and the Celtic player is therefore deemed insufficient, he needs to return to school. Scott Sinclair and Patrick Roberts got 4s, along with substitute Tom Rogic, which could see them pass, but every other Celtic player was given a 5.