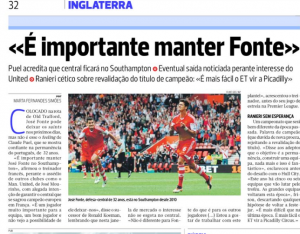 José Fonte has repeatedly been linked with a move out of Southampton this summer. Some newspapers mentioned an interest from Manchester United, and others named Everton. The defender didn’t want to rule out a move, so the story is still alive.

On Thursday, the 32-year-old posted a picture on Instagram where he’s celebrating with Southampton’s shirt and said: “7 years of Passion, hard work, dedication and putting the team first, we was able to achieve success after success!!! Thank you for being there all the way #wemarchon together!!”

It really looks like a pre-season motivational speech from the club captain, but that’s not how the Portuguese press took it.

A Bola, O Jogo and Notícias ao Minuto all refer to this post as “enigmatic” saying it could mean he’s leaving the club, and mentioning that he’s wanted by José Mourinho.

Notícias ao Minuto, especially, say Southampton wouldn’t be able to hold the player in case the bigger clubs come and this would be Fonte’s last chance to sign a big contract.

In a press conference yesterday, Saints manager Claude Puel talked about the importance of Fonte to the team: “For the club and for Southampton, it’s important for Jose to stay. He’s a good player. I don’t think there’s a possibility for Jose to leave us. He’s very important for the team. When I see him on the training ground, he is concentrated and a good professional. Many clubs have an interest in our players. It’s normal”.

The possibilities of Fonte leaving are real and even the manager recognises that, but this reaction from the Portuguese press seems quite exaggerated. They seem a little excited at a possible Manchester United move, even though they’ve largely convinced themselves of that possibility… rather than having genuine reason to believe it.