Home Europe ‘Decisive week’ for player with club confirming offer, thought to be from...
SHARE

Now it turns out that things could start moving quicker, according to a report from Correio da Manhã this Sunday. They say the wonderkid is set to have ‘decisive week’, and his future can be sorted in the next few days.

Manchester City, Manchester United, Real Madrid and Atletico Madrid are the clubs who are said to be in the race.

João Félix will play the Nations League final against Netherlands this evening, and his performance could convince clubs to rush for a deal and avoid competition. 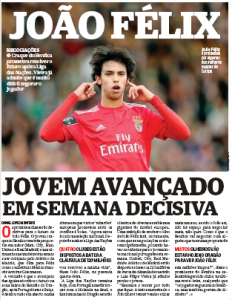 With all the four clubs willing to pay Félix’s release clause, even Benfica president Luis Felipe Vieira has admitted that the club should lose him this summer.

Speaking to the local press this weekend, he said: “We’re trying everything for him to stay. The only way for João to stay is to try to sell and stay for another year. There is no room to negotiate anymore. How will Benfica negotiate with someone who has a proposal of six million clean?”

And that money is thought to be from Manchester City.