Saido Berahino still has three more years left on his contract at Stoke City, but that hasn’t stopped him from training with Belgian club Zulte Waregem.

The forward struggled with Potters since joining them from West Bromwich Albion in 2017. Two days ago, the 25-year-old told the Belgian media he is working on terminating the contract with the Championship side.

He also stressed his desire to leave England and join the Jupiler Pro League side.

Wednesday’s edition of Het Nieuwsblad claims the Burundi international can continue his stay with Zulte Waregem until Sunday, since he hasn’t signed a deal with them.

A decision on the player’s future will be taken this week and he can only join Zulte Waregem if he ends his contract with Stoke. So far, it has not been terminated and it’s being handled behind the scenes. 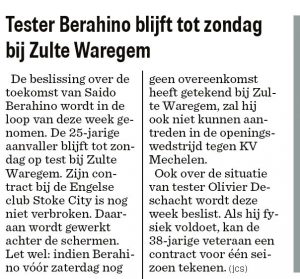 Zulte Waregem face KV Mechelen in the first league game of the season this weekend and if Berahino fails to sign a contract with the former before Saturday, he will not be available for the opening fixture.