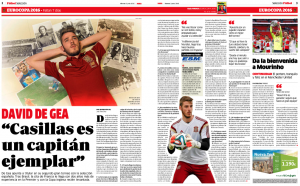 David De Gea has turned against the rumours of him wanting to leave Manchester United. In an interview with Spanish newspaper Marca, the goalkeeper said he’s happy at the club and welcomed new manager José Mourinho.

To talk about Jose Mourinho is to talk of a winner

“There is a lot of talk and little is known. I understand how everything is, but what seems to me as a lack of respect to speak for me. I have three more years with United and wish to keep winning titles “

“To talk about Jose Mourinho is to talk of a winner. And that’s United’s and my philosophy. Around that idea it’s certainly possible to make a great team. I welcome him.”

“When you talk about United, nothing is enough if you don’t win all the titles. It’s clear that not getting into the Champions League has been a problem, but we won the FA Cup after 12 years and after three without winning a title. This should be valued because we’re talking about a very important title for the fans. This FA Cup should help the club win major titles again.”

De Gea’s comments in Marca came on the same day the other Madrid based sport newspaper, AS, was going big on the goalkeeper moving this summer. AS are pretty certain it’s a transfer that can happen, and repeatedly stated that it’s De Gea’s wish to make the move, the kind of report he’s speaking out against.

David De Gea signed for Manchester United from Atletico Madrid in 2011 for €25m and already has 224 appearances for the Red Devils. His contract with the club runs until June 2019 with the option of one further year.