Tanguy Ndombele regained a place in the starting line up under Nuno Espírito Santo, but lost prominence after Antonio Conte replaced the Portuguese at Tottenham Hotspur in November.

The midfielder featured only seven times in all competitions under Conte and that includes only one league start.

L’Equipe explain the 25-year-old finds himself in a complex situation as his position at the club started to ‘deteriorate’ after Spurs appointed the ex-Chelsea boss as Nuno’s successor.

The north London club’s ‘decision seems clear today’ as ‘Daniel Levy intends to separate’ from the Frenchman. He has been made to train alone since Wednesday.

The Tottenham chief favours a sale, with a hope to recover part of the money invested in his signing. However, Levy is aware it is difficult to find such a solution in January and if the former Lyon man were to leave, it would be most likely on a loan deal. 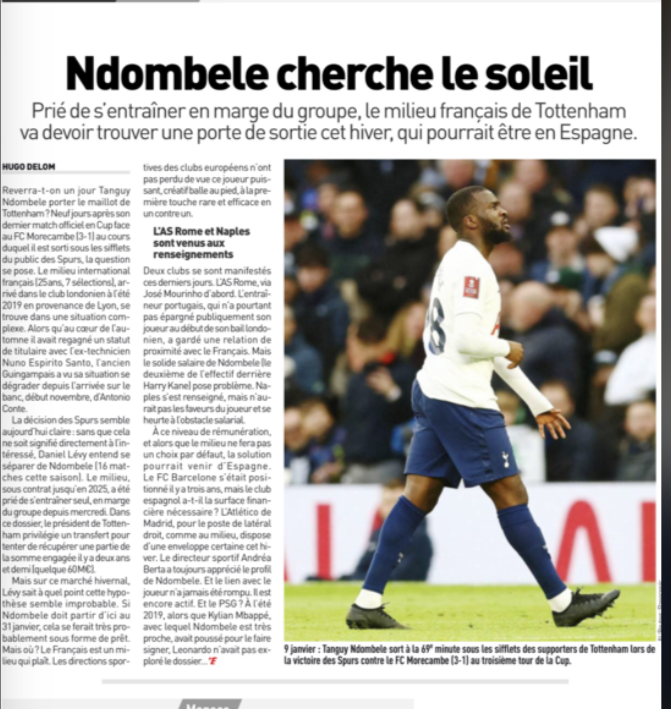 The newspaper states AS Roma and Napoli have come forward in recent days. José Mourinho managed him at Tottenham and has maintained a ‘close relationship’ with his former midfielder.

His high salary could pose a problem for Roma, which is also an obstacle for the Naples club. In addition to this, Ndombele doesn’t favour a move to Napoli.

L’Equipe suggest the solution could come from Spain. Barcelona positioned for him three years ago, but the question remains whether they have the financial means to carry out Ndombele’s signing in January.

Atlético Madrid sporting director Andrea Berta has always appreciated Ndombele’s profile  and the link with Conte’s man has ‘never been broken’. Whether this factor alone would be sufficient for Los Rojiblancos to make a loan approach in the winter market isn’t made clear.