The Spanish media continue to present the idea of Christian Eriksen moving to La Liga, and then snatching the possibility back, and then presenting it again.

On May 18th, Catalan newspaper Sport called it an ‘impossible’ signing after Mundo Deportivo had reported Eriksen wanted to know how much Barcelona really want him.

Then on May 29th, the same Sport brought the possibility back, only to then snatch it away again on the 30th… explaining Tottenham had reacted quickly and offered the player a new contract.

May 30th also saw Eriksen splashed across Marca’s front page. It was explained that despite being a different type of player he could replace Luka Modric at Real Madrid long term, but Marca, after all the front page fanfare, actually talked it down. Because Daniel Levy.

That brings us to May 31st. Marca, despite going big on Wednesday, don’t mention Eriksen in their newspaper at all today, which tells its own story.

But Sport are now excited. There’s only one thing the Catalan sport media like more than a WAR between Real Madrid and Barcelona, and that’s a transfer WAR in which they feel Barca would have the will of the player and an advantage. 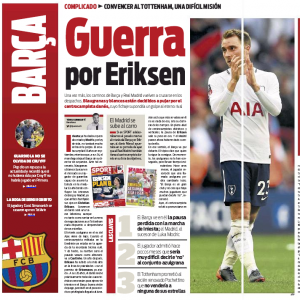 On their front page they carry a snippet saying ‘War for Eriksen’ and inside they carry a headline with the same words, and add: ‘Once again, the roads of Barca and Real Madrid cross again in the offices. Blaugranas and Blancos are determined to bid for the Danish midfielder, whose signing would be a blow to the eternal rival.’

Everything has now been thrown out of the window regarding the move being impossible, and even Marca talking the Madrid story down themselves hasn’t helped: This is now WAR for the Tottenham player as far as Sport are concerned.

After once again listing his qualities, Sport point out how hard it would be to convince Spurs, and then state Eriksen has said previously it’d be hard to turn down Barca.

Meanwhile, Mundo Deportivo today say the signing is ‘impossible’, reversing the dynamics with Sport and making this all the more confusing: ‘Today Eriksen is untouchable, except for a crazy investment that does not fit into FC Barcelona’s plans.’ 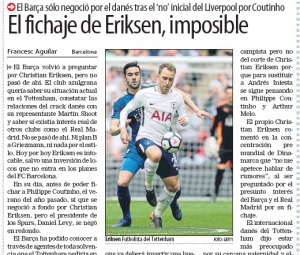 It’s stated that Eriksen had at one time been seen as a back-up option had the Coutinho signing failed, but Daniel Levy wanted €190m, and Mundo Deportivo add: ‘The truth is that Christian Eriksen sees it as impossible to leave Tottenham at the current time’.

So, we have Marca going big, then talking it down in the same article, and then forgetting about it the following day. Sport saying it’s impossible and then getting carried away with the idea of transfer WAR, and Mundo Deportivo also going with the impossible line and saying it isn’t happening.

The poor Danish press mustn’t know if they’re coming or going when covering this. Tottenham fans could be worried by all the stories, but the actual content of them isn’t so scary right now.