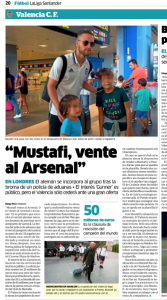 Shkodran Mustafi was welcomed to England on Sunday with a typical slice of the native humour, according to Spanish newspaper Marca.

Customs officers at Gatwick airport jokingly quizzed the Valencia player about signing for Arsenal, and Marca take steps to point out the possible transfer is quite big news in England.

Valencia have travelled to England to continue their pre-season, and are staying at the Crowne Plaza in Marlow, which is conveniently located should a quick dash to Arsenal be needed.

Marca say Arsenal’s interest is no secret, and believe a bid of around €25m plus bonuses could be submitted. Elsewhere the figure has been reported as €30m plus €10m in bonuses, which would sound about right for the German defender.

Valencia’s financial issues were eased with Andre Gomes going to Barcelona, but Marca point out another sale is likely needed, and Mustafi and Dani Parejo are obvious candidates.

A year ago Nicolas Otamendi forced his way out of Valencia by refusing to appear in freindlies, there’s no suggestion of Mustafi doing likewise.

At least the customs officers are trying to edge this one along.