Home Premier League Chelsea ‘Curse that has haunted him’ – Player’s situation goes from ‘bad to...
SHARE

Zinedine Zidane had been a fan of Eden Hazard long before Real Madrid signed the player from Chelsea in June 2019. The manager had been pushing for his purchase, but Florentino Perez never seemed fully convinced, similar to how he feels about Manchester United’s Paul Pogba.

In the end, Zidane won out and Perez sent Chelsea the huge pile of money they requested, despite Hazard’s contract only having a year left on it.

Big things were expected, Madrid thought they were buying the Chelsea version of Hazard, however, things haven’t worked out that way.

In his first season since leaving Stamford Bridge, Hazard made 22 appearances and contributed just one goal, against Granada, and six assists. There were claims that he’d arrived in poor shape, having let himself go a little following the end of Chelsea’s season.

This campaign he’s managed just ten appearances so far and scored twice. Those two goals were a shot against SD Huesca and a penalty against Inter Milan.

Serious questions are being asked, and the Belgium international takes the front page of today’s AS. It’s explained Real Madrid just haven’t got the product they thought they’d secured from Chelsea, and it’s stated Hazard often disappears during matches and doesn’t have enough of an impact. 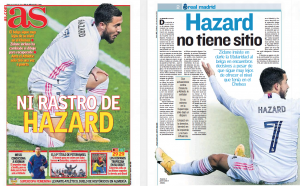 And those are the matches he’s able to play. Fitness problems have continued, and AS say it’s a ‘curse that has haunted him’ since he left Chelsea, with the situation going from ‘bad to worse’.

There are now even suggestions that Real Madrid should consider whether they continue starting Hazard in big matches, even when he isn’t injured. 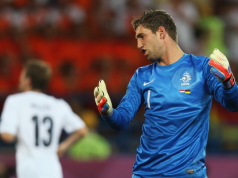