Manchester City are ‘best positioned’ to sign Borussia Dortmund star Erling Haaland, according to Saturday’s edition of AS.

The Citizens eliminated BVB from the Champions League and the latter’s chances of featuring in the same competition next season look difficult as they are seven points behind fourth spot in the Bundesliga.

It’s claimed the 20-year-old wants to leave Dortmund if they don’t qualify for Europe’s elite club competition. This ‘hasty move’ will distance him from his dream club, Real Madrid.

Time is not on the Norway international’s side as he will have to sacrifice playing in the Champions League for one season [by staying at Dortmund] to get his dream fulfilled.

Haaland hasn’t scored in his last seven matches for club and country, and the report points out Real Madrid distancing themselves from signing the frontman could be the reason for his recent poor run.

Based on the ‘current situation’, the newspaper puts Manchester City as the ‘best positioned’ side to take the former RB Salzburg man in the summer. 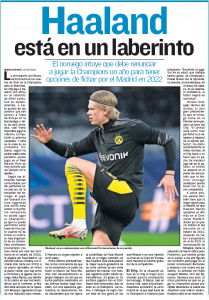 A move to Barcelona is ‘ruled out’ due to their poor economic conditions.

Manchester United are also a suitor for the goalscoring striker and it’s said even Ole Gunnar Solskjaer’s side fear losing Haaland to City.

AS only suggest Pep Guaridola’s side have an advantage because of the situation at Real Madrid and Barcelona, and not because of the efforts made by City for signing Haaland.