BBC 2 came to the rescue at the weekend and secured the rights to the Copa Libertadores final, after it had been shunned by the usual football broadcasters.

It was certainly a match worth watching, with River Plate taking the lead and looking the more assured side until around midway through the second half. Then Flamengo seemed to get some confidence and urgency from somewhere, and when Gabigol got the equaliser towards the end of the game it felt like it had been coming.

Then, in injury time, the striker managed to get the winner and Flamengo fans around the world went wild.

It was inevitable Crystal Palace links with the player would resurface. Corriere della Sera say the Premier League club are ‘on the track’ for the signing, along with Real Valladolid.

That’s echoed by Monday’s edition of Tuttosport, who even suggest the player’s valuation is now around €40m.

Gabigol is owned by Inter Milan and has been on loan at Flamengo. He’d been enjoying a great season and before the final an estimated price was put at around €20-25m. 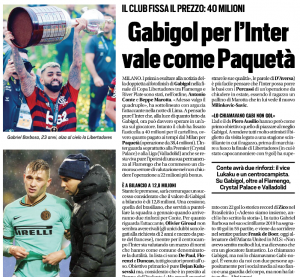 Those two goals have clearly given Inter some hope they can get much more.

They won’t get that from Flamengo, and it’s unlikely, even if the claims of interest are true, that they’ll get it from Valladolid or Crystal Palace either.